Does Radio Frequency Radiation (RFR) emitted from your cellphone  scramble your brain? If  your answer is that is not possible, why then are drivers having up to ten times more accidents after they end their calls?  Evidence, decades old, appears to point to brain malfunction induced by wireless radiation as the unspoken cause of higher rates of car accidents.

It has been 18 years since a major study appeared in the New England Journal of Medicine called Association between Cellular-Telephone Calls and and Motor Vehicle Collisions.(1) The study showed, not too surprisingly, that there was evidence that cell phone use was associated with higher rates of automobile accidents. In the conclusion of their study  the authors were vague as to what was the cause of the increased accidents but driver distraction was what the media  decided was the cause.

Since then dozens of industry funded studies about cellphone use and driver distraction have been published. Almost all of the studies reported that the driver was too busy talking on the phone to drive properly. It seemed researchers hardly ever discussed data that pointed towards other possible causes. Their conclusions focused instead on the main stream paradigm that the drivers mind was not on the business of driving while they talked on the cellphone. This made a lot of sense and it is probably a factor but it did not explain the sheer number of accidents occurring.

Reports stating that automobile accidents were caused by cellphone use were not unexpected. However in the late 90’s the real reason as to why the drivers had more accidents had the potential to cause a tremendous shock wave and prove to be of enormous importance, not only for the wireless industry, but also for the health and safety of billions of people who were about to start using wireless devices daily.

It appeared that many industry funded researchers did not notice that the data they provided in their research indicated that the cause of the accidents was not primarily driver distraction but something much more profoundly disturbing. The evidence from the Redelmeier Study as well as subsequent studies have shown that RFR emitted from cellphones was inhibiting brain function and possibly causing car accidents.(2)

Needless to say the ramifications of this revelation, if proven to be true, were enormous, especially because back in 1998 the wireless industry was about to explode into one of the largest and most profitable industries in the world. The idea that the RFR emitted from wireless devices was dangerous and a health threat was an inconvenient truth that stood between the industry and hundreds of billions of dollars in profits.

Had the truth emerged then and was acted upon I think that it would not be a stretch to say the course of history would have been changed with hundreds of thousands of lives saved and millions of illnesses avoided. But it would not be so. It is eighteen years later and it seems the wireless industry has effectively kept a lid on the evidence. How they did it and why they were successful is the topic of another very important discussion.

The Redelmeier Study was well constructed and the data meticulously recorded. Risk factors were carefully evaluated and there were a large number of drivers involved. Everything was set up to generate good data.

However the conclusions in the study seemed to ignore a key factor. I contacted Dr Redelmeier and in an email asked him how could the researchers conclude that the cause of the accidents was driver distraction when the driver was not on a cellphone for at least 76% of the accidents in this study? He replied saying the study did not address that issue but he speculated that the drivers were possibly distracted by thinking about what was said in the call.

It was widely known that brainwaves  could be influenced by RFR from cellphones.  If so it seemed logical to conclude that the driver’s brain function was being diminished when exposed to radio frequency radiation from the cellphone which led to a higher possibility of being involved in a crash. Several scientific studies published between 1998 and 2000 would show that RFR exposure to the brain inhibited brain function.(3)

With RFR induced brain malfunction now a  prime suspect of the cause of the accidents examine Table 2 in the abstract of the Redelmeier study. It lays out the time of the car accidents, the time when the cellphone call had ended and the length of the call. This table shows  an astonishing trend. The driver was most likely to have a crash right after the cellphone call ended and as time went by he became less and less likely to have an accident. Moreover there appeared to be a dose /response relationship. Below is a  graph depicting the data from the  from the  Redelmeier  Study. 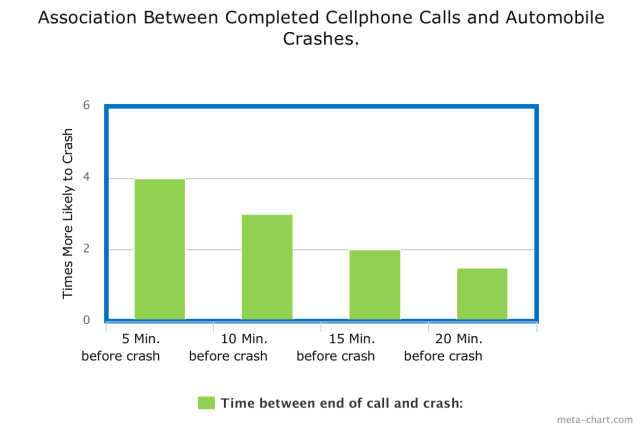 No one is talking on a cell phone when these  these crashes occurred.   This graph clearly shows the shorter the time between the end of the call and the accident, the higher the risk factor of having an accident. There is a clear and consistent pattern. The driver is 4 times as likely to crash just after the cellphone call was ended, 3 times as likely 10 minutes after the call was ended, and 1.5 times more likely to crash 20 minutes after the call ended. This  is strong evidence that something was impeding the person’s brain function as a result of using a cellphone and it had a lingering effect.

Other results in the study showed even higher risk factors for some sub groups. The research showed that hands free drivers were 50% more accident prone than hand-held cell phone users.When a driver uses a hands free device in a motor vehicle the cellphone company is allowed to boost the signal because the antenna is not close to the users head. If the driver is using a wired headset the wire itself can deliver an even larger dose of radiation to the brain with the ear bud inserted in the ear. As well some vehicles have  wireless networks in the vehicle that links to a second wireless network which relays the signal to the nearest cellphone transmitter. All of these features increase the signal strength inside the vehicle and thus the RFR exposure to the brain. This would help to explain why hands free drivers had 50% more accidents than drivers who held the cellphone in their hand.

The Redelmeier study also showed that young drivers were up to 10 times more likely to have a crash if they had used a cellphone. Research shows that younger people’s physiology makes them the most vulnerable group to the harmful effects of RFR exposure. Young people have thinner skulls and the radiation from the cellphone penetrates further into the brain which could cause even more disruption of their cognitive abilities than adults.(4)

To conclude this study showed .

These factors all combined  strongly indicate  that RFR exposure to the brain of the driver impaired his ability to drive and consequently he had an elevated risk of having a car accident.

This evidence gleaned from the Redelmeier study held the keys to the solution of this problem, in my opinion. The incongruity between the data and the conclusions in the study was the stimulus for further investigation that led to what I think is the real cause of the elevated risks of having a car accident after using a cellphone. This was a well-constructed study and even though my conclusions are very different than Dr Redelmeier this work must be commended for its accuracy.

It appears to take about 30 minutes between when a cellphone call has ended and when there  is  no longer any elevated accident risk. Much like drinkers, users of wireless technologies should wait until their wireless buzz has worn off before they operate a motor vehicle. What happens to  the  brain in the long run as a result of RFR exposure is the topic of another article.

Walt McGinnis is an Electromagnetic Radiation Tester and Electrician living in Victoria BC. www.McGinnisElectric.ca

(2): Cell Phone Radiation alters brain function: acknowledgments to a great mentor, now deceased, Dr Neil Cherry.
For years the cell phone companies and government authorities have assured us that cell phone are perfectly safe. They state that the particular set of radiation parameter associated with cell phones are not the same as any other radio signal and therefore earlier research does not apply. They also mount biased review teams who falsely dismiss any results that indicate adverse biological and health effects and the flawed pre-assumption that the only possible effect is tissue heating. There is a very large body of scientific research that challenges this view. Now we have published research, primarily funded by governments and industry that shows that cell phone radiation causes the following effects:- Dr Neil Cherry Probable Health Effects associated with cell phone towers.